West Bengal: The Fisherman Who Clears Plastic Waste from the Ganga

Ganga is not just a river but also a goddess and life. Yes, 40 percent of the country’s population depends on it. Also, it has cultural and spiritual significance but despite this, the Ganges is 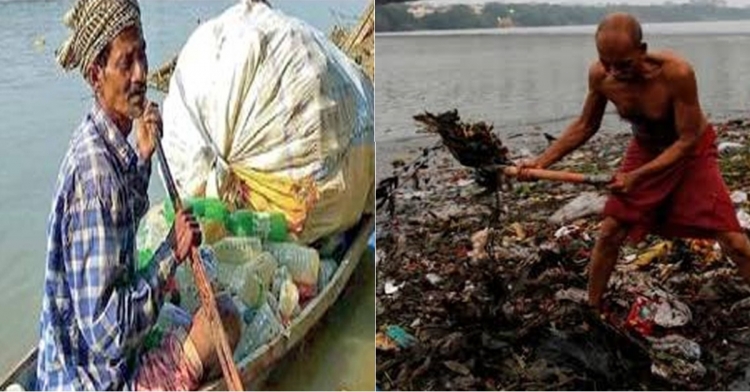 Ganga is not just a river but also a goddess and life. Yes, 40 percent of the country’s population depends on it. Also, it has cultural and spiritual significance but despite this, the Ganges is becoming dirty. To keep the river clean, the government has also run the ‘Namami Gange’ project. But there is a man in West Bengal who did not even hear the name of the project. Still, he goes out daily to pick up the garbage of plastic in order to save Ganga from being dirty.

The name of this man is Kalipada Das, who is 48 years old. The Ganges should not be dirty, so this fisherman picks up garbage every day. He was a fisherman but three years ago, he quit fishing and took up plastics from the Ganges.

This is How The Day Starts

The day of Kalipada begins with Kalaberia of Beldanga. He goes to many ghats from their boat and pick up plastic waste. His day ends at the Bhagirath Bridge in Berhampore or the Farshdanga Ghat.

Proud of His Work…

Now slaves have become plastic binners from a fisherman. But he is proud of his work. He says, ‘Neither the government nor any non-government organization is concerned about the Ganges. I pick up plastic from many ghats in the river.’

He Fills Stomach by Selling Plastic

He Says, I go out in the boat with other fishermen. After that, I float in the river and pick up the plastic bottles spread on the ghats. After working for 5 to 6 hours a day, I collect about two quintals of plastic and give them to recycle by which I can earn Rs. 2400 to 2600. I am not educated, but I see that educated people use plastic and throw them in the river.

Sajal Bhowmik, the high school teacher said that Kalipada Das must be honored for his great initiative to make people aware of plastic pollution.

On hearing the story of Kalipada, Murshidabad Zilla sabhadhipati Mosharrof Hossein Mondal said that we are planning to cleanse the rivers by engaging more fishermen.